Moderator: Time for the first question: Did America do anything in World War 1, which ended a hundred years ago on November 11, 1918, or was it just a waste of time?

Melanie American: World War 1? Never heard of it! I vaguely remember something about Eisenhower and a war in Europe, but I think that was later – not a hundred years ago! If there was a World War 1, it must not have been very important.

Gary: “The general purpose of [the relevant] rules of practice … [requiring the appellant to provide a sufficient record] is to ensure that there is a trial court record that is adequate for an informed appellate review of the various claims presented by the parties…. One specific purpose of a motion for articulation of the factual basis of a trial court’s decision is to clarify an ambiguity or incompleteness in the legal reasoning of the trial court in reaching its decision…. Further articulation … is unnecessary whe[n] the [memorandum of decision] adequately states its factual basis, and when the record is adequate for informed appellate review of the [judgment].”

There was a World War 1, which began in Europe in August 1914. Of course, it wasn’t called that at first. Until World War 2, WW1 was known as “the Great War” or simply the “World War”. During World War 1, Imperial Germany, the Austro-Hungarian Empire, Bulgaria, and the Ottoman Empire, collectively known as the Central Powers, were fighting France, Russia, Britain, Italy and Belgium, known as the Allies. The United States tried to stay out of the war, but eventually was forced to enter on the side of the Allies, in April 1917, by the German U-Boat offensive, which sank American ships and Allied ships carrying Americans without prior warning.
America sent 2 million men, as part of the American Expeditionary Force (AEF), to Europe in 1918, under the command of General John “Black Jack” Pershing. Approximately half of this force saw action, mainly on the Western Front in northern France. These American “doughboys” proved decisive in throwing back the last, large German offensives and in pushing the Germans back to the their own frontiers, at a cost to the United States of over 116,000 dead and an additional 200,000 wounded. Absent the Armistice that brought hostilities to a halt at 11:00 A.M. on November 11, 1918, the last line of German defenses –the Hindenburg line – would have been breached and the Americans and their Allies would have marched deep into Germany itself. The participation of the United States in WW1 was thus both substantial and consequential, but it is largely forgotten today.
Melanie American: That’s right, no one even mentions it. Records for Francis Sulley, an American POW in WWI

Gary: That is one reason why I decided to write a book about a significant but largely overlooked episode that helped to bring the United States into the war. The book is entitled The Yarrowdale Men and America’s Entry into the Great War. It will be published by Cheops Books next spring. A tale of high adventure and severe hardship, it relates the experiences of a group of American sailors taken prisoner in December 1916, in the middle of the North Atlantic, by a German surface raider. The Americans had been serving as members of crews aboard British freighters, each of which was armed with a small gun designed to ward off U-boat attacks

Melanie American: Are you sure this all happened? It sounds more like you are writing a novel.
Gary: Because the small gun was no match for the heavily armed raider, the German warship quickly captured, looted, and sank each of the British steamers, after removing their crews – with one exception,The Yarrowdale. More than 450 captured seamen from a variety of countries, including the United States, were placed aboard the Yarrowdale with a small German prize crew. Led by a ruthless and resourceful officer, the prize crew managed to run the British blockade and reach the German Baltic port of Swinemünde on December 31, 1916, where the captured seamen were taken off the ship.
While most of the seamen from neutral countries were taken to the German border and released, the American seamen who had served aboard British armed merchantmen were treated as belligerents and POWs even though the United States remained a neutral at the time. For nearly two and half months, the American seamen, dubbed “the Yarrowdale men” by the American press, were shunted among various German POW camps, including the infamous Camp Brandenburg near Berlin.
The Americans, like all prisoners of the Kaiser, were given starvation rations and were physically abused by camp guards. Eventually, the Americans were released in early March 1917, but only after their detention created an international incident that threatened by itself to incite hostilities between Germany and the United States. On April 5, 1917, Congress cited the harsh treatment of the Yarrowdale men as a contributing cause for its declaration of war on Imperial Germany.
Melanie American: Are you sure this all happened? It sounds more like you are writing a novel.
Gary: This is a true story of a group of brave Americans who survived their capture on the high seas and their captivity in German POW camps.
Moderator: Time for question 2: Do you have any ancestors who served in WW1?
Melanie American: Never heard of any. I doubt it. I wouldn’t even know how to find out, assuming WW1 was a real war and not just a movie or a romance novel. Gary: I have at least three ancestors who served in WW1, namely my grandfather Alfred Sulley, and my great uncles Francis and Willard Sulley.

A good way to start looking for ancestors who served during World War I is to search the 1930 Census records, a search which can be done for free on FamilySearch (www.familysearch.org). The 1930 Census posed as standard questions “Whether [you are] a veteran of U.S. military or naval forces?” and, if so, “What war or expedition [did you serve in]?”For example, by performing such a search I discovered that my great uncle Willard Sulley, who at the time of the 1930 census was a widower, age 34, living with his parents, had answered the above Census questions by stating “Yes” and “WW”, an abbreviation for “World War,” meaning what later became known as “World War I”. I eventually found out that Willard served as a seaman in the U.S. Navy aboard a troop transport – the U.S.S. Powhatan – from 1917 until 1919.
Another important source are the “United States Word War I Draft Registration Cards.” Three registrations occurred during World War I, on these dates: •June 5, 1917, covering men ages 21–31; •June 5, 1918, covering men who had turned 21 during that year; and •September 12, 1918, covering men ages 18–45
These draft registration cards can also be searched for free on FamilySearch (www.familysearch.org). By performing such a search I discovered a draft card for my great uncle Howard Sulley, born July 2, 1899, whose card was dated September 12, 1918. (Howard had just turned 18.) While Howard was registered for the draft, World War I ended less than two months later, November 11, 1918, before he could be drafted. These cards are also useful for turning up other contemporary information about your ancestors: Howard’s card reveals that he was employed in New York City at that time by the New York Central Railroad as a stenographer.
(Of course a search of the draft registration cards will not turn up ancestors who either volunteered, such as my great uncle Willard, who enlisted in the Navy, or my grandfather Alfred who became an ambulance driver in a unit attached to the 71st Division of the AEF (the “Lightning Division”), or whose National Guard units were drafted into the U.S. Army wholesale: the Pennsylvania National Guard unit of my wife’s grandfather, Howard Dietrich, which became the 28th Division of the AEF (the “Keystone Division”).)
Unfortunately, not all records of WWI have survived. Most importantly, the majority of the official military personnel files (OMPFs) (16 to 18 million files) for World War I AEF and other Army and Air Force veterans were destroyed during a catastrophic fire at the National Personnel Records Center in St. Louis on July 12,1973. However, some records survived the fire and others were not affected (U.S. Navy files, for example, which were stored elsewhere). Even in cases where the OMPF files for a particular ancestor have been lost, information may still be available from other sources such as VA medical records, or burial files. Melanie American: Sounds like a lot of work. If it’s not on Google, I wouldn’t know how to find it.

Gary: Just google www.familysearch.org to get started.
Moderator: Time for the third question: Did WW2 have anything to do with WW1?
Melanie American: I don’t think so. Why would it? I remember something about World War 2, but never World War 1.
Gary: WW1 ended with the Treaty of Versailles of 1919, whose vindictive provisions blaming Germany for the war and imposing massive reparations largely lay the groundwork for a renewal of hostilities just 20 years later. Also, the severe casualties suffered by Britain and France in WW1 made these countries extremely reluctant to go to war again, despite the growing menace presented by Adolf Hitler’s Nazi Germany. This lead to the disastrous policy of appeasement, and, once WW2 began, the conduct of the Phony War from September 1939 until May 10, 1940.
Melanie American: I’ve certainly heard about Hitler! He was the worst dude who ever existed. Did he have anything to do with World War 1?
Gary: Adolf Hitler enlisted in and fought with the Imperial German Army on the Western Front, serving primarily as a messenger. In 1918 he was gassed with mustard gas while in the trenches facing those occupied by British troops and temporarily lost his eyesight. Melanie American: I guess it was important to defeat that bad guy, Hitler. But then it might have been better not to run into him at all, not even in a dark alley let alone on the battlefield.

Gary: WW2 is what led to the world as we know it today, with the United States as the reigning superpower. For the United States, it was the signal event of the 20th century. To say it was a “waste of time” is to say that America should have remained a power of the second rank, while ceding dominance of Europe and, hence, the world to Nazi Germany. It would mean that American foreign policy would essentially have continued to be governed by isolationism, and not by internationalism.
Melanie American: I don’t know what internationalism is. Too big a word. But it sounds like trouble. 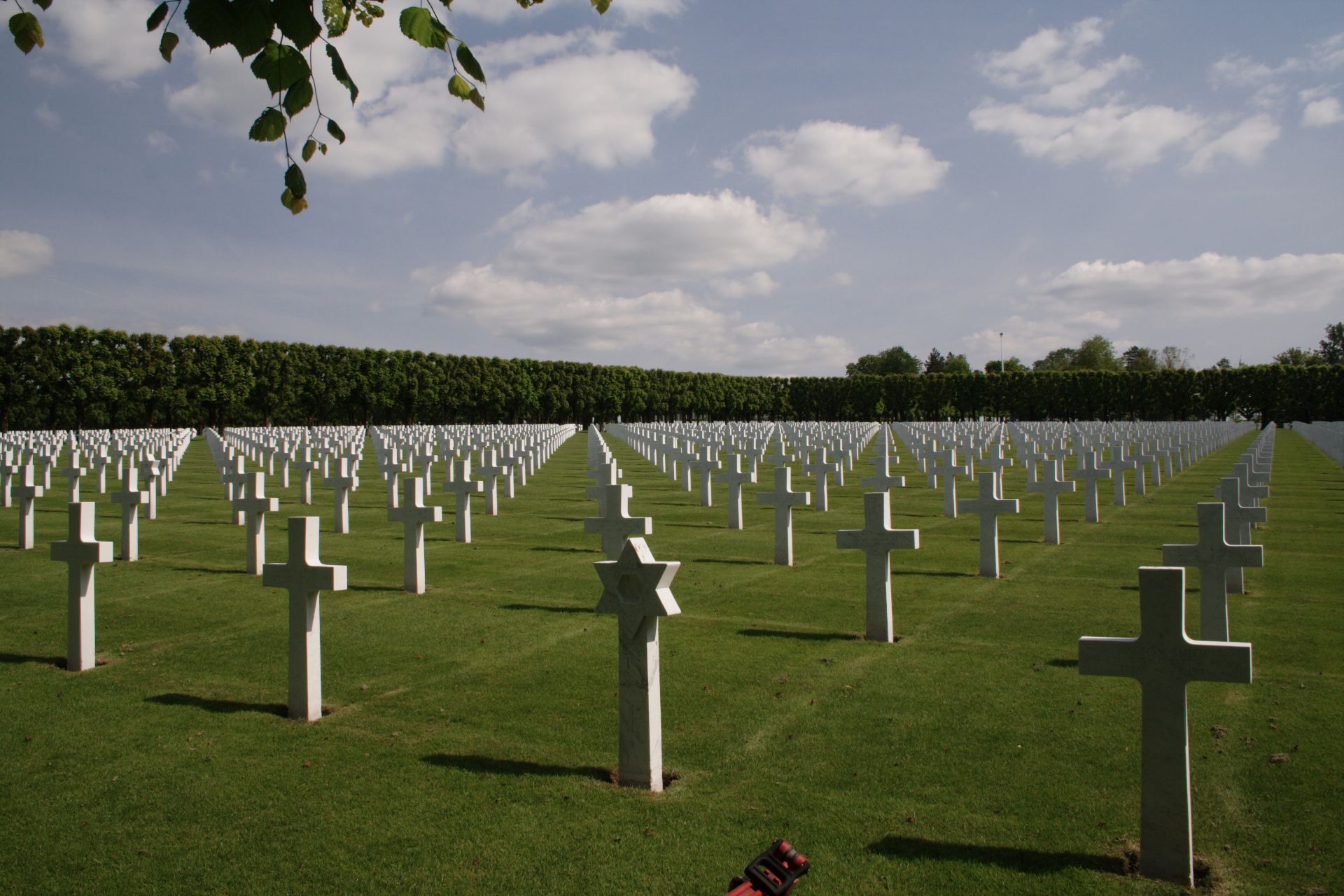 Gary: It just means you are an American who is willing to learn about and get involved in international affairs, as opposed to an “isolationist” who wants nothing better than to ignore and stay completely out of the affairs of the wider world.
﻿